Posted by Dave on April 17, 2009
Posted in: Uncategorized. Leave a Comment

Today I was given an air compressor at work for free. The only catch was that it didn’t turn on and had a broken wheel. A quick clean of the contacts on the power switch and it turned on. Instead of replacing the wheel we decided to fix it. 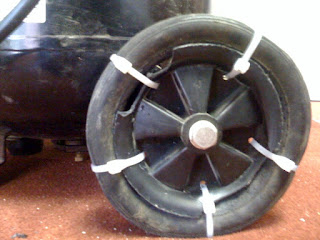 Five holes and five zip ties later and we had a wheel that was as good as new. Now all I have to figure out is why it doesn’t automatically turn off until the safety valve blows.